Multiverse and Multidimensions – Into the Bhagavad Gita

Till now, we considered our Universe as the sole source of existence embodied with all the galaxies, stars, planets, and moons. But in the last recent years, scientists have started believing the fact that there can be multiple parallel Universes similar to us, existing in their own dimension and running in their own time-frames. All these concepts are now being promoted inside movies and comics as well. Concepts like time travel and multiverse have now become a mainstream genre although they are not yet scientifically proven.

But these concepts have already been mentioned several times in our ancient Hindu scriptures, Puranas, Vedas as well as the Almighty Bhagavad Gita which were all written thousands of years ago.

What is a Multiverse

A multiverse according to Wikipedia is a hypothetical group of multiple universes. Together, these universes comprise everything that exists: the entirety of space, time, matter, energy, information, and the physical laws and constants that describe them.

But Multiverse, according to Hindu scripture is a collection of infinite universes floating in the cosmic sea known as the KARNA ocean. All the possible timelines of these universes are observed by Maha Vishnu. 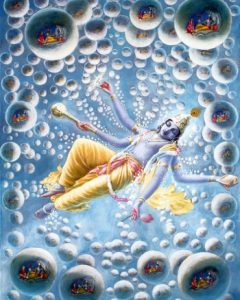 Brahma Ji, The creator of our Universe (Brahmand) once tried to test Shri Krishna when Krishna was playing with his friends and calves grazing on the field. Brahma Ji kidnapped all His friends and cattle and took them to Brahma Lok (house of Brahma) and hid them there. Shri Krishna, being the Almighty, understood the complete situation and He copied himself in the form of all His missing friends and cows so that no one gets to know that they are originally missing which otherwise would have created chaos in the village.

After a year, Brahma Ji returned to the same village to get the whereabouts of the situation but he was shocked to see the same children and cattle whom he had kidnapped were playing there cheerfully. He was in a completely curious state that how can normal beings stay in both Brahma Lok as well as on the Earth at the same time. Brahma Ji, driven by his overconfidence, understood that it was a magic trick by the Almighty and asked him that how it was possible.

Shri Krishna then soulfully closed His eyes and Brahma Ji saw an uncountable number of other Brahmas in all forms of existence floating above the ground. Some had 10 heads, some 100 while some had thousands of them and they were all worshipping The Almighty together. Shri Krishna then politely told Brahma Ji, that he is only the creator of this Universe but there are other infinite Universes each having their own creator and each maintaining their own birth and death cycle.

Thus through this story mentioned in Bhagavata Purana, Shri Krishna directly enlightened us with the concept of Multiverse via Brahma Ji.

10 dimensions of the Universe

We all are living in this 3D world where we are able to experience only the stuff that we can feel via our senses. But according to the Puranas, there are 10 dimensions which are as follows:

Fourth Dimension
The 4th dimension space depicts how our 3D world is changing with time and therefore our 4th dimension is time. This dimension is always moving forward and time was considered as an absolute parameter until Albert Einstein proved it wrong through his Theory of Relativity.

It is said the Earth (Bhu Loka) acts as the middle planet which co-exists with the lower and higher planets (in total 14). Some of the higher planets are Swarg Loka, Tap Loka, Satya Loka while the lower planets are Patala, Atala, Vitala. All these planets co-exist in 3D with having time as the fourth dimension. 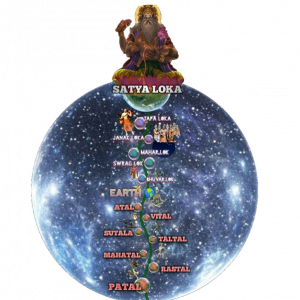 A normal human brain is developed to experience things only till the fourth dimension.

Fifth Dimension
This is the Multiverse dimension where Brahma Ji of each Universe resides having command over their own individual Universes. The birth and death of Brahma Jis happen in this dimension only.

Sixth Dimension
Maha Vishnu is the sole resider of this dimension in His 3 forms each having its responsibilities and purposes. Vishnu is responsible for the birth of Brahma in each of the Universes and also for maintaining life in them.

Eighth Dimension
Parallel timelines of the eighth dimension constitute Kailasa. Kailasa is a place where Lord Shiva and Parvati reside. Hence Shiva lives in the eighth dimension of the Universe. His purpose is to maintain the balance of all the previous dimensions. Lord Ganesha also exists in the same dimension.

Ninth Dimension
The ninth dimension is Vaikunth Loka – where the trilateral expansion of Narayan resides. This dimension is the sole generator and creator of all the other dimensions. A soul which attains Moksha resides in this dimension.

Multiverse and Multidimensions – Into the Bhagavad Gita

The idea of parallel universes disturbs many scientists but is entirely natural in Indian traditions.

Lord Krishna offers a glimpse of multiple cosmic creations and annihilations to his disciple Arjun; different universes are located in different parts of the cosmic body of Krishna.

Arjun says that he sees Lord’s infinite form in every direction, with countless arms, stomachs, faces, and eyes. Lord Krishna asks him to behold and see His hundreds and thousands of wonderful forms of various shapes, sizes, and colors. Here the numbers are approximated to hundreds and thousands which sums up to infinity depicting the existence of infinite parallel Universes of which Lord Krishna is the Supreme Creation.

Krishna, although being an avatar of Vishnu, takes birth in the original form as the Supreme Personality of Godhead. Brahma, Vishnu, Shiva have specific duties and purposes but Supreme Lord cannot have just a single purpose. Therefore though Vishnu is the first God of cosmic creation, Krishna is the supreme God (God of all Gods). Therefore Krishna is there before time. He is the source of all spiritual worlds and cosmic worlds thus residing in the tenth dimension.

Shri Krishna explains the process of cosmic creation in this shloka that when the day of Brahma Ji begins, the entire Universe comprising of all living and non-living things wakes up and begins to act. This process continues until the end of his day. Then, the whole universe goes back into the same unmanifest state that it sprung from. Since each Brahmi Ji is in the command of His own Universe, so it applies to the complete multiverse.

It is said that around 4,320,000,000 years on Bhu Loka (Earth) make up for 1 day in Brahma Loka. Since new life begins each day in Brahma Lok, that means it continues to these many years on our planet. Thus it indicates that the time is not absolute. Also, in the material universe, not even Brahma Ji is free from the process of birth, old age, disease, and death. The life span of Bhrama Ji is of 100 years after which He is again reborn for his own Universe thus controlling this material world.

Shri Krishna mentions that those who remain unaffected by the day and night of Lord Brahma are nothing but Ishvara. He also mentions the nature of Ishvara as imperishable, unmanifest, and supreme. The seeker who performs karma yoga or devotion towards Ishvara attains Ishvara after he has completed his time on earth and in the abode of Lord Brahma. Thus the person gets to reside on the dimension higher than that of Lord Brahma and is not subject to further rebirth.

Lord Krishna’s pastimes are eternally ongoing in material creation. This means all The transcendental activities that He performed 5000 years ago here on earth are continuously performed in other universes. For example, He spoke the Bhagavad-Gita to Arjuna 5000 years ago here on earth. He is speaking the Bhagavad-Gita to Arjuna right now in another universe, and once He is finished, He will start to speak it to the same Arjuna in another universe and so on. All His activities are continuously repeated in different universes, one after the other.

Also in the movie Tenet, there is a discussion about a time-travel paradox about a person going back to time and killing his/her own grandfather. In that case, the person is not supposed to be born which leads to a paradox. But according to Hindu mythology, it works differently. If a person does time travel, he/she will go back into a different universe without affecting the current Universe. Shree Narada Muni, the great sage was capable to travel through the multiverse across all dimensions because of His infinite power and wisdom thus making him the Interstellar.

Since there are infinite Universes floating around, there can be chances that there is a twin replica of yourself residing in a different Universe. Some people also believe that deja vu (the feeling of having lived through the present moment already) is something experienced by your universal twin in a parallel universe that is ahead of time. 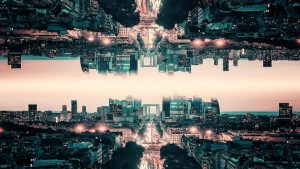 With the advancements of science and technology, we are now seeing that concepts mentioned in Puranas and The Bhagavad Gita are actually turning out facts. Since now the scientists have already started believing it, in the upcoming years, hopefully, we get to see more insights on this multiverse.

In an infinite multiverse, there is no such thing as fiction ~Scott Adsit

The Secret Contradicts The Bhagavad Gita

The Secret Contradicts The Bhagavad Gita 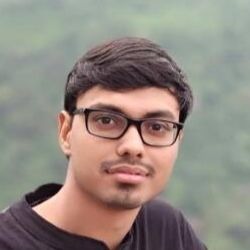